Pay Now or Pay Later-Take the Fight to ISIS

Bad news does not get better with time, and neither does a bad situation.  We have done little to keep ISIS in check, and as Bill O'Reilly mentions, it is free to attack with little fear of reprisal. Calm and Unity is not a strategy; it is a hollow soundbite. Solution for the Syrian refugee crisis focused on the wrong issue. It's not where to put them but why THEY LEFT IN THE FIRST PLACE. A failed and weak foreign policy on Syria years ago put in motion a global refugee crisis and the proliferation of ISIS.Since violence is waged against Westernized states, Muslim led countries have very little incentive to get involved. Whether complacent or fearful, it will bite them in the ass-even hard-line regimes are too moderate for ISIS. I will select my president based on who I believe will do the most to address the ISIS threat.Trump's foreign policy vision is a wall with Mexico, which highlight how clueless and ill-equipped he is for the presidency. This is an issue our collective leadership needs to aggressively deal with now in order to take action, rather than wait for attacks and take pitiful reaction. If not us, then who? We are a world leader, we do not to be a world doer on this. Our legacy should be uniting a global effort instead of being a spectator waiting for our bubble to be popped. And popped it will.

Bill O'Reilly's excellent breakdown on the avoidance of dealing with ISIS and the major candidates' ineptness on the threat. http://video.foxnews.com/v/4813182525001/destroying-isis-does-america-have-the-will/?intcmp=hpbt1&playlist_id=trending#sp=show-clips

We don't need I support France or Belgium banners, we need Eradicate ISIS banners! And I've got it right here. 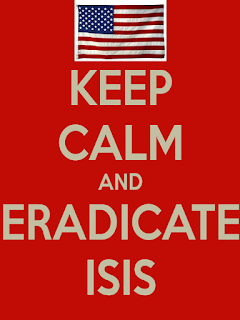 article on US online ISIS supporters

ISIS Social Media in the US

Afghanistan is a primitive society with archaic institutions...

At least, that is likely the public's perception and conclusion every time the media reports "justice" based on tribal beliefs occurring in Afghanistan (Pakistan has similar problem, but that is a different topic). Perhaps ISAF , State Department and the government of Afghanistan (GiRoA) can counter that by emphasizing current institutional justice by GiRoA, especially if it possibly would have alternately been dealt with in an "archaic" tribal process.

The key to winning tribal based populations (essentially Pashtun belt and Helmand/Khandahar region) is to build and support at the lowest level a local justice system to gain acceptance from tribal communities, who ultimately identify with/turn to Taliban because of shared justice process beliefs. Then highlight and inform, but also let GiRoA support of local justice process speak for itself. For key demographics, the support of national government begins with this issue at the local levels
Posted by iFX at 4:18 AM No comments:

http://toinformistoinfluence.com/2012/05/24/camille-chidiac-co-founder-of-leonie-industries-does-the-honorable-thing/
Posted by iFX at 8:19 AM No comments:

Time to Review our Internal Branding of 9-11

A month ago I tweeted is was time after a decade to establish 9-11 as a “Remembrance Day” instead of a day of horror, tragedy or revenge. While adults can easily compartmentalize such categories, I offer our younger generation is not capable of such. It is time to actively reflect how we are internally branding this watershed moment and ask ourselves “Is this how we want to instill, reinforce and project our perceptions of what 9-11 means?” The answer could very well be “yes.”
I offer a vignette, an insight into a young mind whose only understanding of “9-11” is from a church remembrance video that day and questions he asked of me that morning. Levi, 7, in church drew the image he found compelling-the “God’s Cross” at ground zero. Several weeks ago, on his own he drew a “slide show” (see below) of his understanding of 9-11: “sad day,” “when the planes crashed,” God’s cross, and images of the towers before impact. On three sheets of paper he produced images that spurred more emotional impact than the images I saw live on TV in 2001. While I was proud his young mind understood what occurred that day, I was concerned how he would digest it in the coming years. This is not a call to remove such associated imagery, but a call to focus on how we want to portray this event to ourselves and to those that will follow. Let's determine our information projection and not succumb to information momentum. 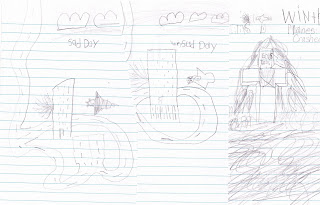 The Army War College's Information as Power Blog published a piece I wrote about tackling the Taliban's influence in preparation for a drawdown.
Posted by iFX at 11:33 AM No comments: